We’ve all been there. A day at the record fair, a box full of vinyl, and the prices are just so irresistible that it doesn’t seem to matter that … well, the discs are a little grubby, aren’t they? Make that filthy. Coated in dust and shrouded with fuzz, with grooves that look like they’ve been filled with sludge, then left out in the sun till it has set solid. Forget a diamond-tipped stylus; you’d need an industrial-strength chisel to play this baby.

There has never been a shortage of record cleaners on the market or record cleaning tips on the wind. Years ago, I had a friend who swore by an alcohol and cheesecloth combination, although I have often wondered since how his vinyl sounds today. And, of course, there’s good old-fashioned dish-washing liquid and a soft cloth wiped clockwise around the platter. It’s great if you’ve only got a few to wash, but does get a little labor intensive if you’re confronted with a pile.

The top of the modern market for cleaning, of course, is a vacuum device that takes all the pain and strain out of cleaning, but unfortunately makes up for that by costing somewhere in the region of an arm and half a leg.

Enter Spin Clean (www.spincleanrecordwasher.com), a glorious slab of sunny yellow goodness that has yet to balk at anything I’ve thrown at it, and that includes a copy of “Cabbages and Kings” that, rather appropriately, a previous owner appears to have used as a vegetable garden.
Spin Clean Record Washer

Spin Clean has been around since the late 1960s, and the principle has not changed in all that time, which, in itself, is a seriously major recommendation. Not only are these things built to last, they were also built correctly in the first place. Records haven’t changed in the past 50 years, so why should the way we clean them?

The principle isn’t that different to the old wipe with a damp rag method, although there is naturally a little more to it than that. A plastic reservoir, a little bigger than an LP record, is filled with water, then topped up with a few drops of the enclosed cleaning fluid. Two soft black sponges and a pair of moveable rollers are inserted, the offending disc is slipped between them, and then, you slowly spin, thrice in one direction, thrice in the other. Then remove the disc, allow it to dry, dab it down with the enclosed wiping cloth, and voila: an album that once scarcely was capable of even being played is suddenly transformed into an object of shiny, smooth and pristine beauty. 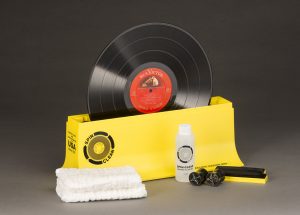 The price is nice. Under $80 for the basic model; $125 for a package that includes extras of everything; and $150 for a transparent model that actually lets you watch the muck slough away as you spin the disc. And it does. I’ve had sessions where even a couple of dozen albums that looked more or less good as new have turned the solution brown.

Because it’s not only ground-in dirt and superficial dust that comes away. The residue of past —shall we say “cheaper” — cleaning fluids also can play a role in gunking up a record, although I should also point out that drop-for-drop, Spin Clean’s own fluid is more economical than any other I have tried. It works better, as well.

Now for the downside, if you can call it that. Four drops of cleaning fluid will clean up to 50 albums, but that does not mean that if you have only 25 to clean you should use only two. Four is simply the right amount of fluid to add to a reservoir full of water. Thus, if you only have a handful of discs to clean, you probably want to wait until you’ve got a few handfuls more before sitting down to spin. Probably.

But even that depends upon how dirty the records are, and therefore how dirty the water gets. The cabbage patch mentioned earlier left so much scum bobbing around that it wouldn’t have mattered how few discs had been washed, there was no way another was going into that mess. In fact, I’ve had more than a few cleaning sessions where I’ve been changing the water every 15 or so albums, and reading other collectors’ experience on the Internet, I’m not alone in that.

Ah, but what difference does all this really make? Well, a few nights ago I sat down to listen to the first Al Stewart album (stop laughing at the back! It’s great!) and was more than a little perturbed to discover the surface noise was almost as loud as the opening song. Onto the wash pile it went, and as I write, I’m playing it again. Not a problem in earshot. And I will say the same for every other album I’ve cleaned, and that includes ones that looked OK before their bath. We all know that there’s a lot of invisible garbage that can build up in a record’s grooves, and that a lot of other cleaners will do no more than nudge it. Spin Clean is the first product I’ve used that honestly does make a world of difference. While it won’t repair scratches and scars in the vinyl, I’ll tell you something weird: It even made them sound better.

Now, if someone could just invent a device that could flatten the warp out of vinyl …


“"Recently I decided to digitize some of my out-of-print albums to share with friends and wanted to make sure they were as clean as possible, so I finally broke out the Spin Clean. Wow, what a great job it did! I'm sure I'll be using it a lot more often from now on."”


“Thanks for creating an awesome product that allowed for me to save old records that got wet & dirty from a tornado years ago. Now they are clean and I can play them again :)”